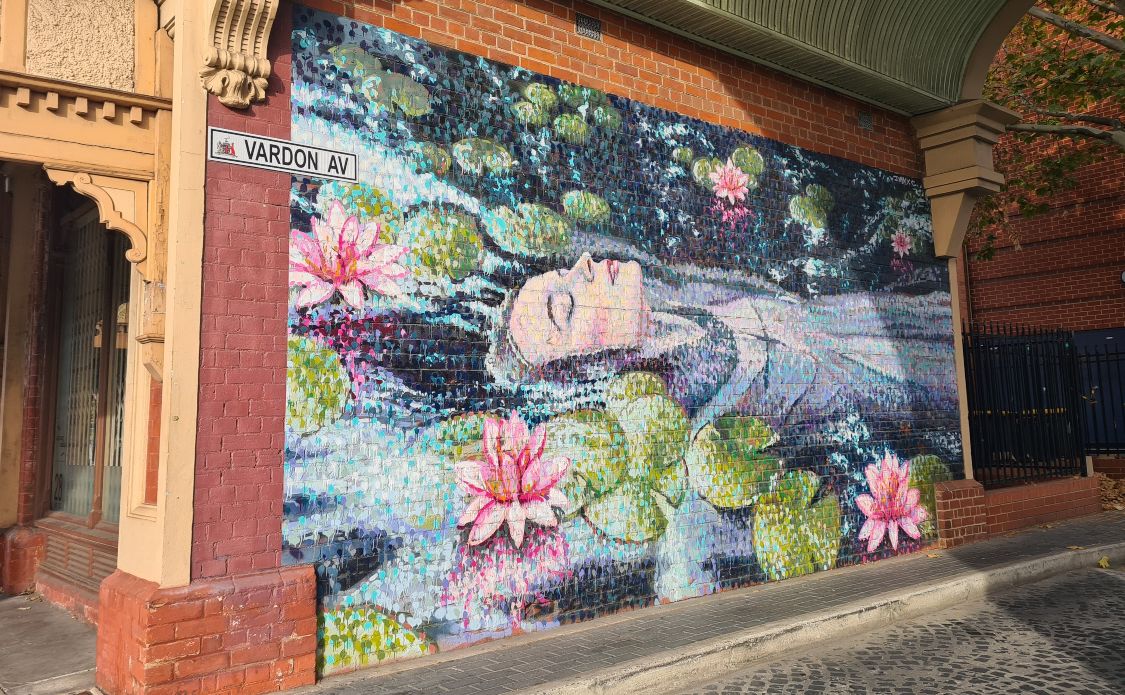 While many consider Melbourne Australia’s street art capital, we suggest Adelaide is the best place in Australia to find stunning street art portraits. You could spend several days wandering the city admiring the public art and the many large scale murals in Adelaide central business district.

We would like to acknowledge the Kaurna people as the traditional owners of the country where the city of Adelaide is situated today.

How to find the best street art in the Adelaide CBD

Often when looking for street art, you find the best stuff hidden away from sight in back alleys and nooks behind buildings, but in Adelaide, it’s often front and centre. The vibrant and artistic city is one of Australia’s largest outdoor galleries.

The city’s street art scene has been helped by very supportive policies put in place by the city council. They have commissioned and promoted the art form with festivals and local authorities no longer remove artwork but encourage it.

Art festivals that have been hosted in Adelaide:

Adelaide’s largest mural was painted by multi disciplinary artist Dave Court, to celebrate the occasion. His artwork is driven by experimentation. The inspiration for this music mural was drawn from past album covers and music posters. The installation view is located on Hindley Street.

Local Street Artists whose work you will discover in Adelaide

Jimmy C, Aka James Cochran, played a significant role in the development of Australia’s underground graffiti movement during the early 90s.

His stunning work is easily identified once you are introduced to his pointillist style. Some of his most famous pieces were created in the SANAA festival, the Wonderwalls and the Fringe Street Art Explosion project, including ‘The Howling Owl’ on the Howling Owl Cafe and ‘Ophelia’ on Vaughn Place.

The best way to experience and learn more about his work is to join in a tour of his work by Flamboyance Tours.

She has collaborated with Jimmy C on several stunning murals in the city centre, including their collaboration of the respected Aboriginal Elder Gadlabarti.

‘Kaurna Community and wider Aboriginal community for whom Gadlabarti was a leader, mentor, father, brother, uncle and friend. It was an honour to paint him with my good mate’ elizabethclosearts.

There are dozens of her creations across Adelaide that include her murals among them the Little Rundle Street Project and the City Music Laneway‘s No fixed Address Lane music mural.

Lisa King is a self-taught artist inspired by fashion photography and pop-culture. On the search for freedom and expression, King became one of the first female voices in city urban art.

Her famous artworks can be found right here in the artistic city including the mural on the front wall and guest room at the Majestic Minima Hotel in North Adelaide and the iconic 80s inspired mural on the front of the live music venue, Jive on Hindley Street in Adelaide.

Jasmine Crisp considers herself a narrative painter. She uses traditional painting techniques to illustrate how the world is experienced. This is highlighted in her Sia Furler Lane mural, “She Imagined Buttons”, the first of Adelaide’s City Music Laneway. She explains that the mural of the Adelaide born singer conveys her own personal experience of the singer’s 2011 performance, which gave feelings of inclusivity and passion.

Crisp also has artwork in Johns Lane that featured in the 2020 SANAA which she collaborated with Kenya’s Victor (ViktArt) Mwangi. You can find more of her inclusive street art around Adelaide CBD.

Aka Joel Moore, began painting as early as 3 years old and is now a now Contemporary Visual Artist. Including his graffiti work, Vans has over 1000 artworks over Adelaide, including 100 odd mural pieces. Some artworks you will come across in Adelaide City include the ‘Hand of God – Diego Maradona’ which runs off Rundle Street by the Sugar Nightclub, his SANAA Festival piece on Grote Street, and his Moonta Street murals in Chinatown.

Although based in South Australia, Vans the Omega has taken his street art talent all over the world. He helped create Port Adelaide into an iconic destination for street art with the three-day festival, Wonderwalls.

Claire Foxton is known for her large scale portraitures which are inspired by the truth of the people and places in which she creates her art. Her style is a combination of realism and abstract and are strategically placed in spaces typically used for decoration or advertising.

Foxton was a part of the 2018 Adelaide Fringe Festival where she painted the famous Muriel Matters mural on Flinders Street, Dawkins Place laneway. Muriel was a significant historic figure for South Australia and women’s rights.

Aka Seb Humphreys, is a graffiti artist who specialises in large scale mural projects. His work is inspired by nature’s complexities and uses vibrance and graffiti art to show us the world we live in with a different perspective.

You will come across his artworks all over Adelaide, including his collaborations with Jimmy C on Wright Street and his SANAA mural on Register Street which was collaborated with Senegal’s Zienixx.

Peter Drew has had an influential impact on Australia with his famous ‘Aussie Series’ paste-ups. Drew’s art’s purpose is to revitalise what it means to be Australian. His signature paste-ups comprise vintage portraits of immigrants and Aboriginals with the word ‘Aussie’ printed in large, bold text across the poster to ingrain that these people who were a part of Australia’s history are in fact too Australian, regardless of skin colour or cultural background.

His most renowned paste-up is of Monga Kahn, who survived the White Australia Policy and became a crucial role in the country’s development. Through Drew’s street art, he has made Monga Kahn a known ‘Aussie hero’.

Aka Jimmy Smith is an abstract muralist who is renowned in the community for his vibrant colour palette. The Walking Creative’s aim is to evoke happiness through his artwork. He uses geometrical shapes and has been inspired by nature on his travels around various tropical islands.

One of his charitable pieces can be found right here in Adelaide CBD where he painted a mural on York Street dedicated to World Sight Day. This celebrated mural had a grand opening which was unveiled by the executive team, Lord Mayor, the South Australian Governor and the South Australian Health Minister.

The visual artist, Jake Holmes, is a voice for social and political issues through his powerful poster campaigns. Holmes, along with Peter Drew, was the creator of the rainbow ‘C’mon Aussie C’mon’ campaign that fought for Australian marriage equality. He also collaborated with Elizabeth Close with his poster series supporting the ‘change the date’ movement.

The city of Adelaide has also been decorated by many international artists, some of who have collaborated with the before-mentioned local artists.

Ireland’s Fin DAC is known for his popular portraits of Asian women. He has left colourful statements all over Adelaide city. He was invited by Sydney street artist, John Smith, to be apart of the Little Rundle Street art project, Street Art Explosion where he painted a vibrant and dimensional mural in Varden Street.

One of his renowned murals can also be found on the wall at the University of Adelaide.

Aka Mohammed Awudu, was also an influential part of the SANAA Festival, leaving a part of his home country, Ghana, in Delhi Street.

The inspirational artist claims art saved his life as his talent helped him to get off the streets. He now considers himself as an ambassador for his community and uses street art as a means to shine a light on his country and community.

Senegal’s Beau Graff has left his creative mark in Adelaide during the SANNA Festival. You will find the graffiti and visual artist’s work popping with vibrance on Hindley Street.

Kenya’s Naney Chelwek, aka Chela (short for her Nandi name, Chelagat) is a voice for women in the world of art. Her work is inspired by Africanism and motherhood. Her mural can be found at the University of South Australia.

Other Established Artists and their Renowned Adelaide Street Art

It’s a good idea to have travel insurance to cover any cancellation or unexpected problems that may arise. We use and recommend Cover-More for all our travel. They also offer an Inbound plan for anyone visiting Australia.

Discover your favourite piece in the outdoor gallery of Adelaide with one of these tours that will take you along an artistic adventure.

Don’t forget to keep an eye out for Adelaide’s next Wonderwalls festival!

From aspiring graffiti artists to household names, if you love street art, you really should take the short trip out to Port Adelaide where you will find a huge concentration of murals.

We went on a walk with Adelaide local Josie who runs the website Exploring South Australia. Josie lives near the Port and took us on a stroll around town to find all of Port Adelaide’s amazing artworks. She also introduced us to Banksia Street Cafe, which you must go to if you make the trip out here.