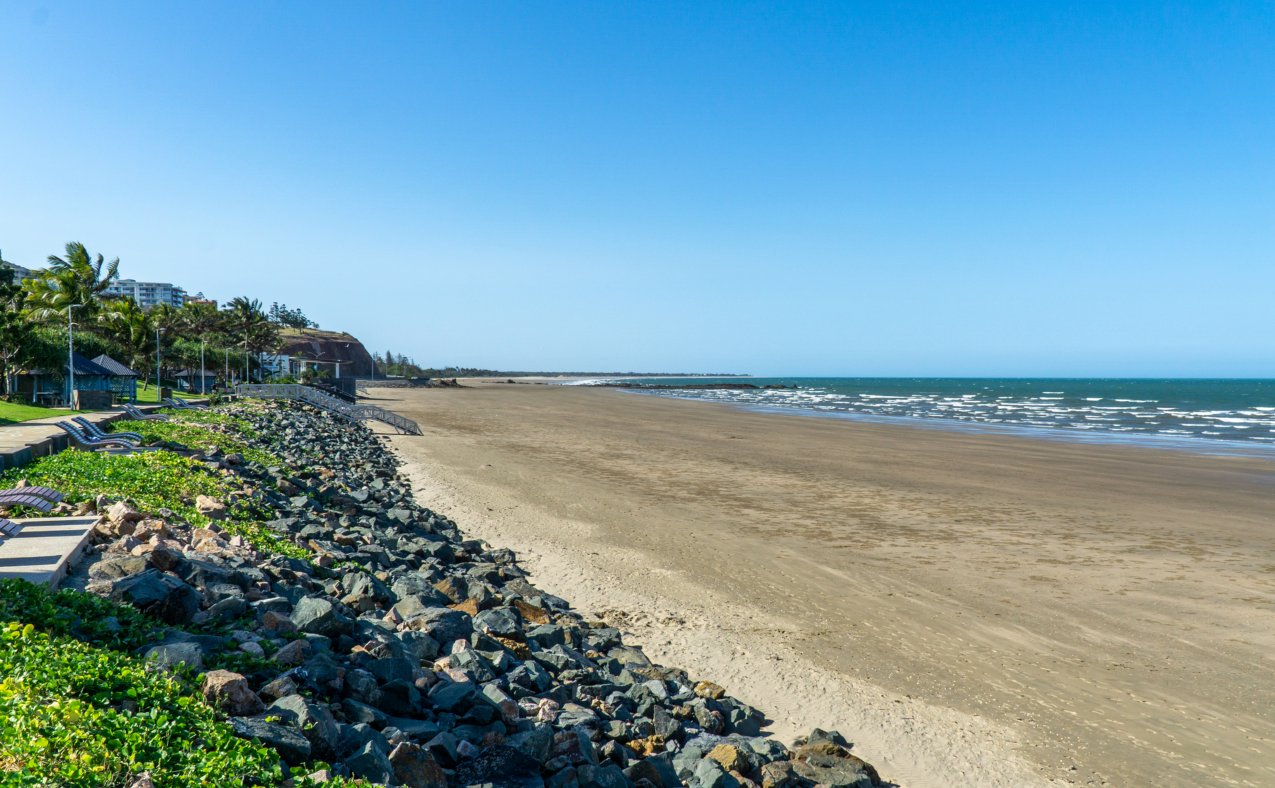 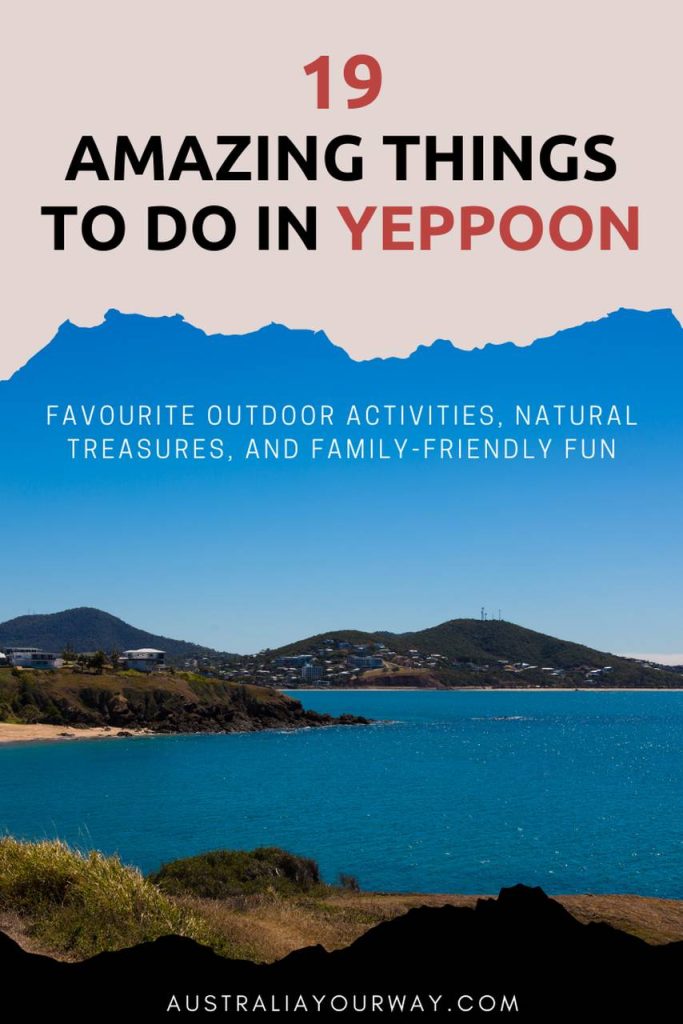 19 CHILLED OUT THINGS TO DO IN YEPPOON

Look forward to a laid-back holiday with the best things to do in Yeppoon by a local. See Yeppoon’s favourite outdoor activities, natural treasures, and family-friendly fun.

Yeppoon is a small coastal town in Central Queensland, Australia, with island views and a tropical climate. The closest major city and airport is Rockhampton, just 40 kilometres away, making it a convenient beach escape. In this guide, we’ll be sharing our top things to do in Yeppoon and surrounding sites, including the understated Keppel Bay Islands and Byfield areas.

The Darumbal People are the Traditional Custodians of the Capricorn Coast area including Yipun (Yeppoon).

Things to do in Yeppoon and the Capricorn Coast

Upon arriving in Yeppoon, you’ll want to get orientated. Start by dropping into the Capricorn Coast Visitor Information Centre. It’s a delightful 15-minute stroll from the centre of town, taking you along the foreshore, through Appleton Park, and past the mangroves. The visitor centre is easy to spot with a bright, larger-than-life mural of a child snorkelling. This is one of many street art spots you can find during your visit to Yeppoon.

After picking up a map and having a friendly chat, pop next door to Shell World, a gold coin donation gives you access to 20,000 shells which include marine, land, and fossil molluscs.

If your visit to Yeppoon happens on the weekend, why not pick up some fresh produce and a memorable souvenir at one of the local markets?

Yeppoon has a surprising number of cafes for a seaside town of less than 7000. A local favourite that will make you feel like you’re on a beach holiday is Lure. Park yourself at one of the rustic, outdoor tables with sea views. Lure serves up cafe fare with plenty of vegan, vegetarian, and gluten-free options.

Following a scrumptious brunch, take a walk along the Yeppoon foreshore. Stretching from the Yeppoon Surf Life Saving Club to the Keppel Bay Sailing Club, this colourful walkway twists between palm trees. Keep an eye out for the black cockatoos who get especially vocal in the mornings and afternoons.

Feeling like a swim? The Yeppoon Main Beach is patrolled by Surf Life Savers, depending on conditions. Or, if you’re a family, head to the Keppel Krakken. This free marine-themed water park is a joy for kids.

One more free, family-friendly spot to cool off is the Yeppoon Lagoon. There is a 2500 square-metre swimming pool with shallow sections and an infinity-style edge looking out to the Keppel Islands. Find a shady patch of grass to relax and enjoy the jovial atmosphere with the locals.

On the other end of the town centre from the Yeppoon lagoon is Spring Head Lookout.

At the roundabout next to the Yeppoon Surf Life Saving Club, follow Adelaide street uphill. This will bring you to a soft, grassy knoll overlooking Farnborough Beach, Yeppoon Main Beach, and Fishermans Bay.

Discover hidden street art tucked away in Yeppoon laneways and on the side of buildings. Spread out across several suburbs, including Cooee Bay, Rosslyn, Mulambin, and Emu Park; these pieces have been inspired by the local landscape and community. See the list of street art locations on the Central Queensland website.

Local tip: For more creative things to do in Yeppoon, check out the Fig Tree Galleries (open daily from 9:30 am to 4:30 pm) and Nob Creek Pottery in Byfield (currently by appointment only).

A perfect half-day at Cooee Beach consists of an espresso at Two Sister Coffee, a long leisurely swim at Cooee Beach, then lunch from the Cooee Bay Takeaway. Eaten on the beach, of course. Families with young ones will also enjoy the playground at Daniel Park. All within walking distance of each other.

Situated above Cooee Bay and Lammermoor Beach is Wreck Point Lookout. Close to this point is where the transport boat, Selina, washed ashore in 1848.

To commemorate this shipwreck, a sculpture has been created with information boards and a short walking trail.

Don’t let the name fool you – Emu Park isn’t some kind of zoo. Instead, it’s the name of the suburb 20 kilometres south of Yeppoon. Believed to originally be named after emu sightings, it’s now most well-known for the Singing Ship and monthly markets.

The Singing Ship Sculpture lives up to its name with the concealed organ pipes vibrating with a musical tune caused by the breeze. The sculpture is designed to be reminiscent of a ship’s sail and is connected to the short ANZAC Memorial Walking Track. Following the path down takes you along the coastline to the ANZAC memorial walk with battle markers, WWI storyboards, and historic photos.

The street art spots in Emu Park include:

While south of Yeppoon, make a day out of it by stopping in at the other coastal suburbs of Zilzie, Kinka, and Lammermoor (from south to north). Each beach is worthy of a walk, letting your toes sink into the sand.

Local tip: The stunning drive studded with palm trees that mainly follows the Scenic Highway also takes you past the giant whale building in Kinka Beach.

Cruising along the Scenic Highway, you’ll cross a bridge over Mulambin Creek. This wide-mouthed waterway connects to the sea. Looking away from the ocean is a popular fishing location and Causeway Lake kiosk with fish and chips. To the other side is a path leading down along the creek and connecting to the wind-swept beach.

Local tip: The toilet block in the Causeway car park also has a mural with an important environmental reminder.

The pristine beaches are certainly one of the best things to do in Yeppoon, but if you can’t do them all, we suggest Kemp Beach. This idyllic stretch of sand is located between the Capricorn Coast National Park’s Bluff Point Track and Double Heads Section.

Local tip: After bobbing around in the sea, dry off and cross the street to Beaches restaurant. Here you can enjoy locally grown, farm-to-plate cuisine or join a yoga class at the wellness centre downstairs.

Bluff Point walking track in Capricorn Coast National Park is a 2.3-kilometre circuit that winds up through bush scrub to reach the peak. At Summit Lookout, you’ll be rewarded with sweeping views of the coastline.

At the aptly named Turtle Lookout, you may even be lucky enough to spot turtles. On our last visit, the only wildlife we saw besides bush turkeys was a snake – so be vigilant, as always.

The second section of the national park has three shorter tracks, less than one kilometre long. Look for the signs to Pebble Beach, Rosslyn Bay Lookout, and Fan Rock Lookout.

Fan Rock is particularly impressive with a fan-type pattern in the rock wall created by lava.

Local tip: For a bonus viewpoint, continue along Vin E Jones Memorial Drive to the cul-de-sac by the sea. There’s a pathway that leads along the cliff face with a giant, smooth boulders. The markings in the rock wall are fascinating and worth a look.

Right next to the Double Heads Section is the marina where all boats depart to the Keppel Bay Islands of the Southern Great Barrier Reef. There are 18 islands in Keppel Bay, with the largest and most visited being Great Keppel Island (GKI).

Surrounding these islands is the Great Barrier Reef Marine Park, with protected and preserved marine life. This is why many visitors choose the Keppel Islands for snorkelling and scuba diving. Daily ferries run to GKI (see more below), or you could book a tour that visits multiple islands such as the Keppel Explorer.

Local tip: As part of the national park, you can even camp on eight different islands. However, there is no ferry service to these, so you’d either need your own vessel or book a charter.

Read how to plan your Great Barrier Reef holiday.

In 2020, the Woppaburra people were formally recognised as native title holders of the 13 Keppel Islands including Woppa (Great Keppel) and Konomie (North Keppel).

Great Keppel Island (GKI) is the easiest island to visit if you don’t happen to have your own boat. The two main companies that run regular services to GKI are Keppel Konnections and Freedom Fast Cats, which are both located in the marina. Choose from island transfers only or full-day trips, including a glass-bottom boat tour.

We’d suggest one day on the boat and one full day on the island if you have the time. GKI has 17 secluded beaches and six walking trails to take you from one end of the island to the other. You can snorkel right off the beach at Shelving Beach, Monkey Bay, Butterfish Bay, and Wreck Beach.

See how to choose the right Queensland islands for your holidays.

The Byfield area begins approximately twenty kilometres from Yeppoon and is made up of three distinct zones. These include Byfield State Forest, which is accessible by 2WD, as well as Byfield National Park and Conservation Park, which requires a 4WD to access.

Local tip: If your trip to Byfield falls on the weekend, stop in at Fern’s Hideaway for a meal or even to stay in one of their cabins. The restaurant is open for lunch on Friday, Saturday, and Sunday, and dinner on Saturday night with live music. By dining at the restaurant, you’ll have access to all their facilities, including canoes.

For those with 4WDs, you can continue onto Nine Mile Beach in Byfield National Park and Five Rocks Beach in Byfield Conversation Park. These are considered to be some of the most beautiful beaches in the region.

Local tip: Another popular spot for 4WD owners is Sandy Point, north of Yeppoon off Corio Bay Fish Habitat Reserve Road. A river connects to the sea, and when it’s low tide, it creates a beautiful pattern in the sand of small divots filled with water.

Author: Chantell Collins is a Pinterest Advertising Consultant, eco enthusiast, and occasional Travel Writer. Her work has been featured in Skyscanner, Yahoo, MSN, and many more. After living abroad for almost ten years, she’s renewing her affection for Australia through slow travel.