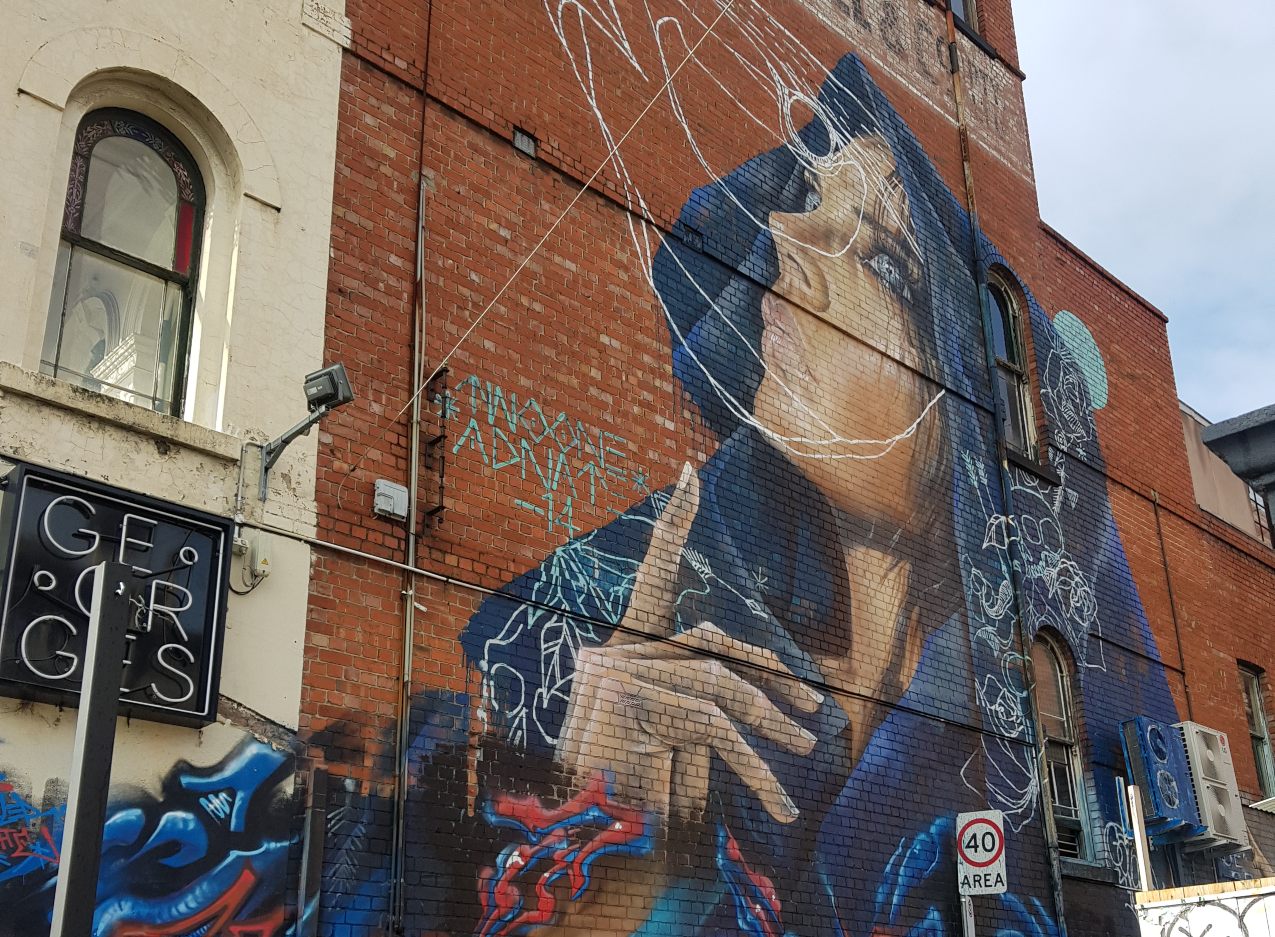 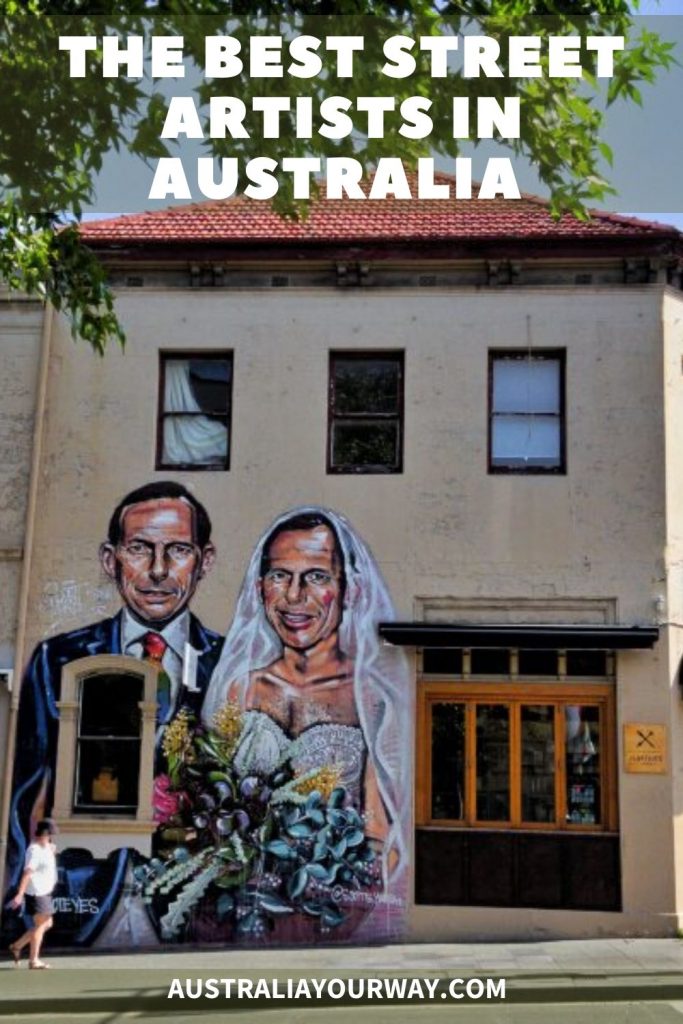 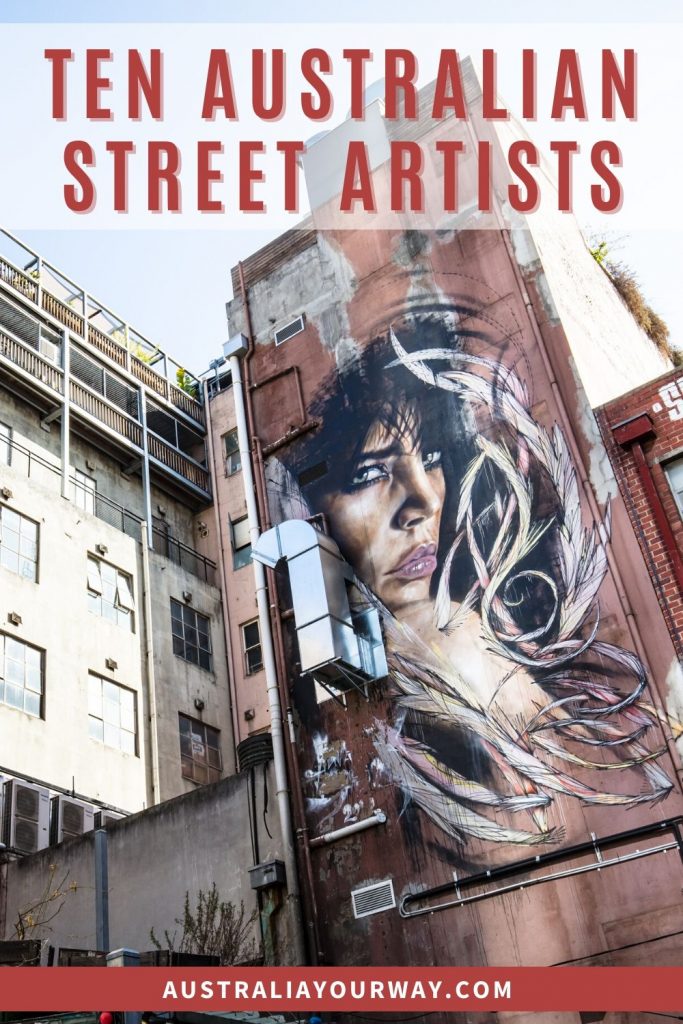 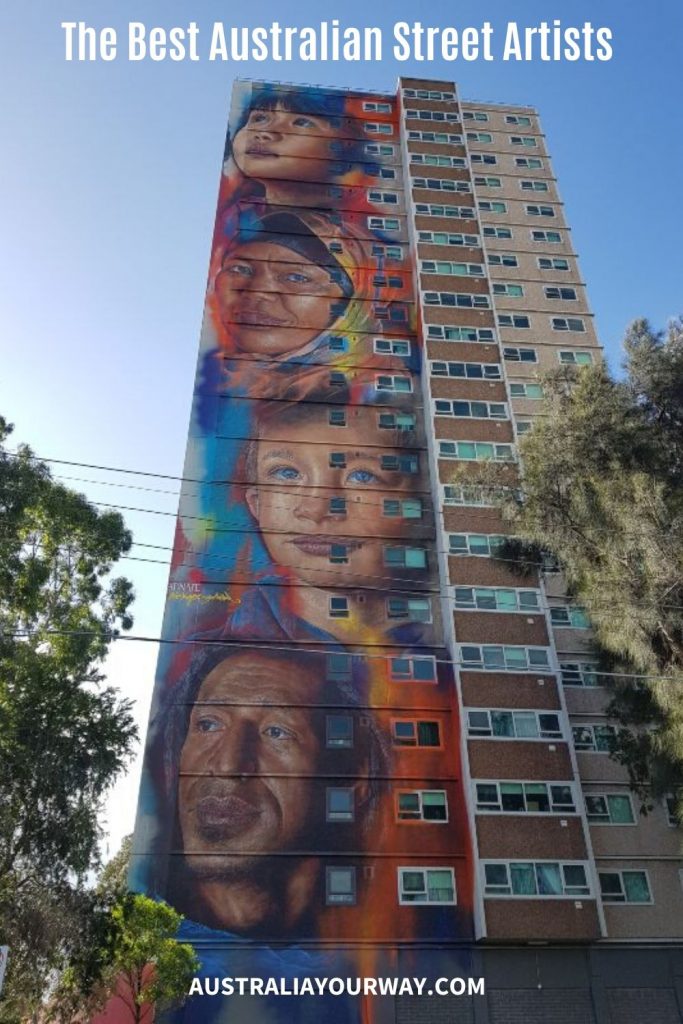 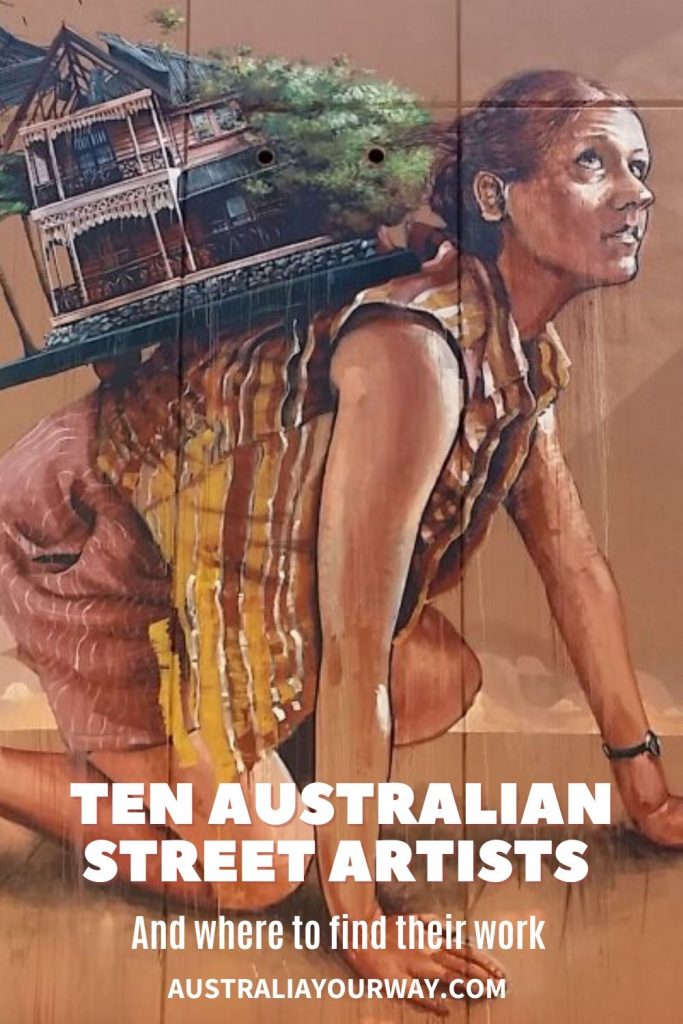 How many Australia Street Artists can you name? While places like London and New York might be known as the international capitals of street art, Australia is not without its own vibrant and thriving scene. Here are ten famous Australian street artists whose work you can appreciate on your travels.

Street art has the power to bring imagination and expression to the dreariest parts of a city. Emerging from the counterculture of the late 1980s and 90s, street art has come to be valued across the world for its playful, intelligent and striking contributions to the modern city.

Matt Adnate, often known simply by his last name, is a muralist specialising in enormous portraits of famous and not famous Australian and international figures.

Starting out in the more informal world of street art, Adnate is now a sought-after figure, renowned for his fine huge, expressive works and a hyper-realistic style he feels is heavily influenced by the chiaroscuro of Renaissance greats like Caravaggio.

Adnate was paid $300,000 to complete the 20-story project apartment building above proving street art can be a career! You will find his work around the world however there is a significant body of work featuring indigenous Australians across the country.

You can now even stay in the Adnate Hotel in Perth, an Accor property in Hay Street Perth.

If you are heading to Melbourne to see the Collingwood mural check out our guide to the best areas in Melbourne to base yourself.

Born in Lismore in country New South Wales, Fintan Magee’s playful mix of realist imagery and abstract design has won him acclaim not just in Australia but across the world.

This work on the front of the Urban Hotel on Enmore Road in Sydney is a commentary on housing affordability.

Often injecting social commentary into his work, Fintan’s iconic murals feature on towers and in laneways everywhere from Finland to French Polynesia. That said, Fintan’s work is probably easiest to find in his adopted home city of Sydney, especially in the inner city and inner west.

Reko Rennie styles himself an “interdisciplinary artist”, one who works across a large number of mediums, but he’s probably best known for his street art. A Kamilaroi man, much of Rennie’s work is dedicated to the exploration of Aboriginal issues and identity.

Fusing traditional Kamilaroi iconography with bold and distinct geometric patterning. Though exhibiting at the Venice Biennale in the past, one of Rennie’s most famous works can be found on Redfern’s iconic Block.

Canberra born Guido Van Helten is another rising star of the Australian scene. Working in a photorealistic style and often with a sepia pallet, Van Helten is well known for his work in regional Australia.

Van Helten won the 2016 Sulman Prize for his work painting classic Australian characters on the old silos at Brim, Victoria. Since then he has gone on to paint around the world, and has taken a particular interest in a growing offshoot of mural work that’s being called “silo art”

From the world of finance to that of street art, Sydney-based Mulga made quite a career transition in 2014, but safe to say he hasn’t looked back. Known as Joel Moore in his days as a number cruncher, Mulga works in a very cool style that draws heavily from skate and surf culture.

His pieces are vibrantly coloured, stylised representations of funny and unlikely phenomena, for the most part revolving around a tropical and nautical theme. Mulga’s designs are in high demand in gallery and corporate advertising campaigns, but much like the man himself, you can catch his work hanging around Sydney’s best beaches.

Rone, or Tyrone Wright as his mother calls him, was born in Geelong and grew up doing street art in his local skate parks. Today Rone is best known for his hauntingly stylised depictions of female faces which are as likely to be found in a gallery as on the streets where he made his name.

Rone’s impetus to do street art comes from a desire to see the streets “alive” and he often creates in high traffic areas of major cities. If you’d like to see Rone’s work, he’s particularly prolific in parts of Melbourne.

George Rose is a Melbourne-based artist who was formally trained as a graphic designer. But Rose has long since thrown off those shackles, in favour of a multi-disciplinary approach (with a particular interest in murals). Her style is hard to pin down, and it’s something she describes as constantly evolving.

That said, it’s hard not to notice the centrality that bright colours and gradients play in her work, and the emphasis she puts on floral motifs and the natural world in general. Rose has worked with a number of fashion designers, both big and small, though many of her murals can be found in her home of Melbourne.

Sharon Billinge’s work is something that proudly centres community and society. Living in Sydney, Billinge often works closely with community groups in the creation of her acclaimed public murals, seeking to create pieces that “explore the importance of social bonds and human connection as a force for positive social change”.

While Billinge often includes bright colour in her work, she’s not afraid to use sombre black-and-white or sepia schemes in many of her murals, particularly those that feature human faces. Although her work is scattered across Australia and she’s participated in numerous international art festivals, you’ll find most of Billinge’s body of work in her native Sydney.

Perhaps the most political artists on our list “Scottie” Marsh has hit the headlines regularly over the last few years. His work provides a commentary on the most charged issues facing Australians and as a result, often disappears quite quickly.

Sydneysider Marsh began tagging as a 12-year-old and went on to complete a Bachelor of Fine Arts, majoring in Painting at UNSW. http://scottmarsh.com.au/about

Hailing from the sleepy coastal town of Narooma, New South Wales, Phibs (known to the Tax Office as Tim De Haan) operates out of Sydney. Creating “wildstyle street art” Phibs’ work synthesises the natural and the artificial in the complex, interwoven and frenetic confusion of wildstyle.

Phibs’ innovative and constantly evolving melange of designs and iconography can be found all over Australia’s cities, particularly in the suburb of Fitzroy in Melbourne.

Along with large annual festivals there are a lot of one-off events run by councils across the country, often in an effort to increase tourism.

These are the main annual events we have found and/or attended:

Got a question? Head over to our Facebook Community and ask locals and experienced travellers for help.

Check it out now

9 thoughts on “Australian Street Artists To Put On Your Radar”

Join our Australia Your Way community on Facebook for fast, friendly help with your questions.

Any cookies that may not be particularly necessary for the website to function and is used specifically to collect user personal data via analytics, ads, other embedded contents are termed as non-necessary cookies. It is mandatory to procure user consent prior to running these cookies on your website.