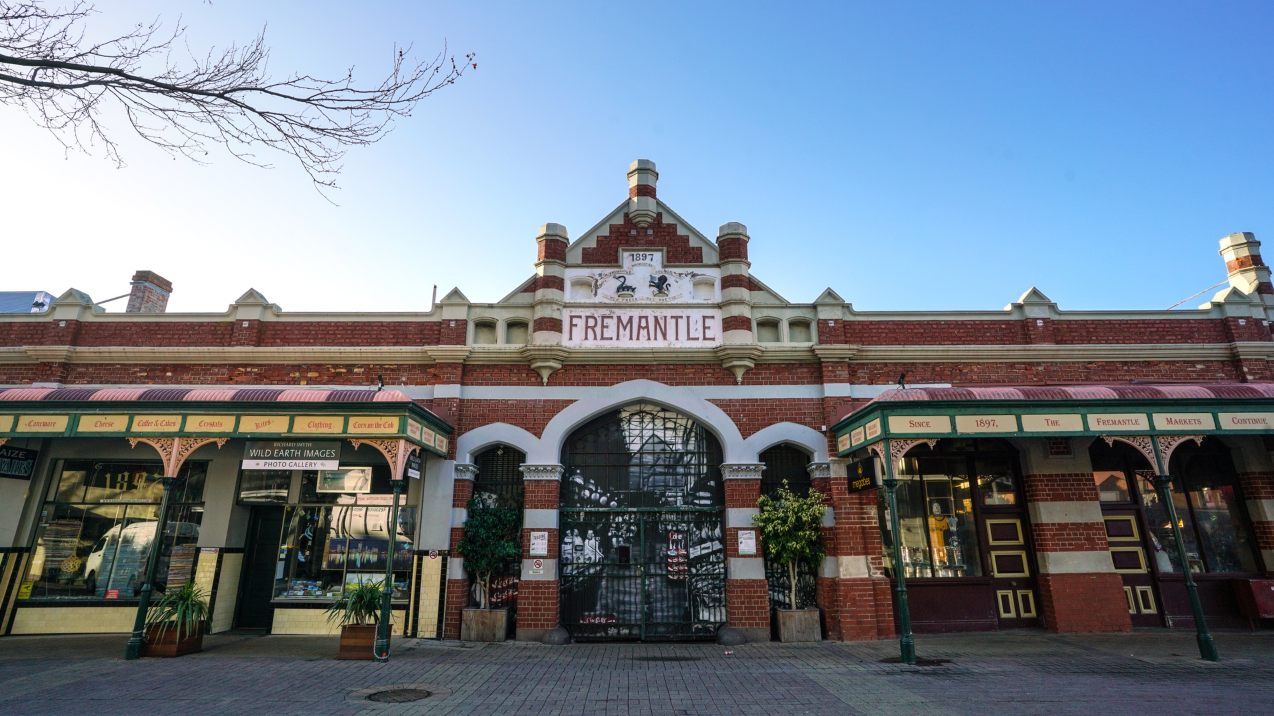 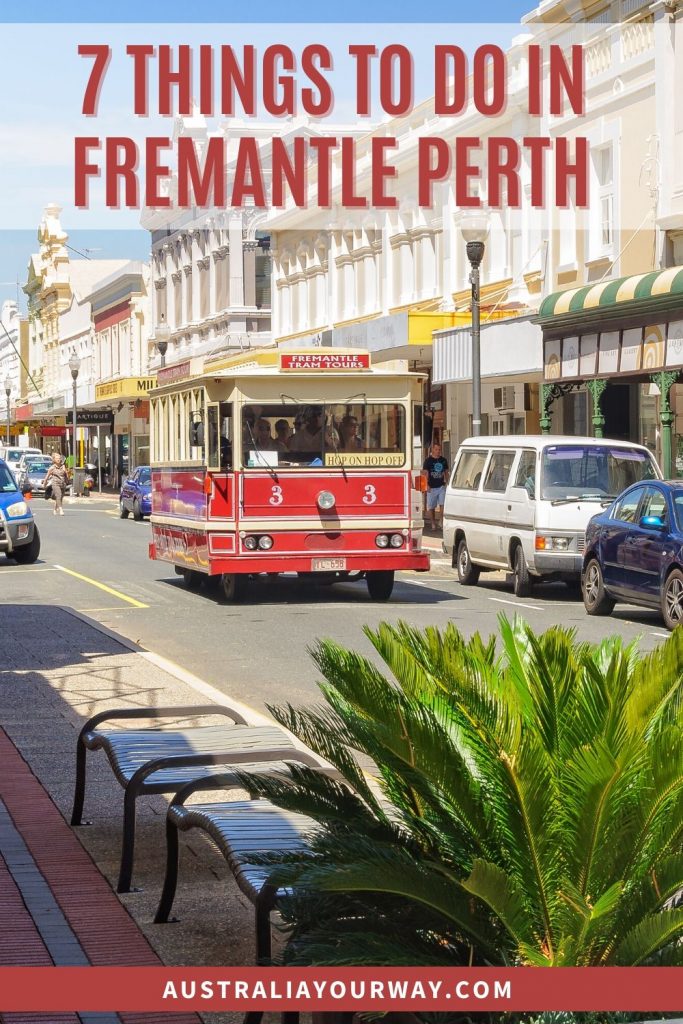 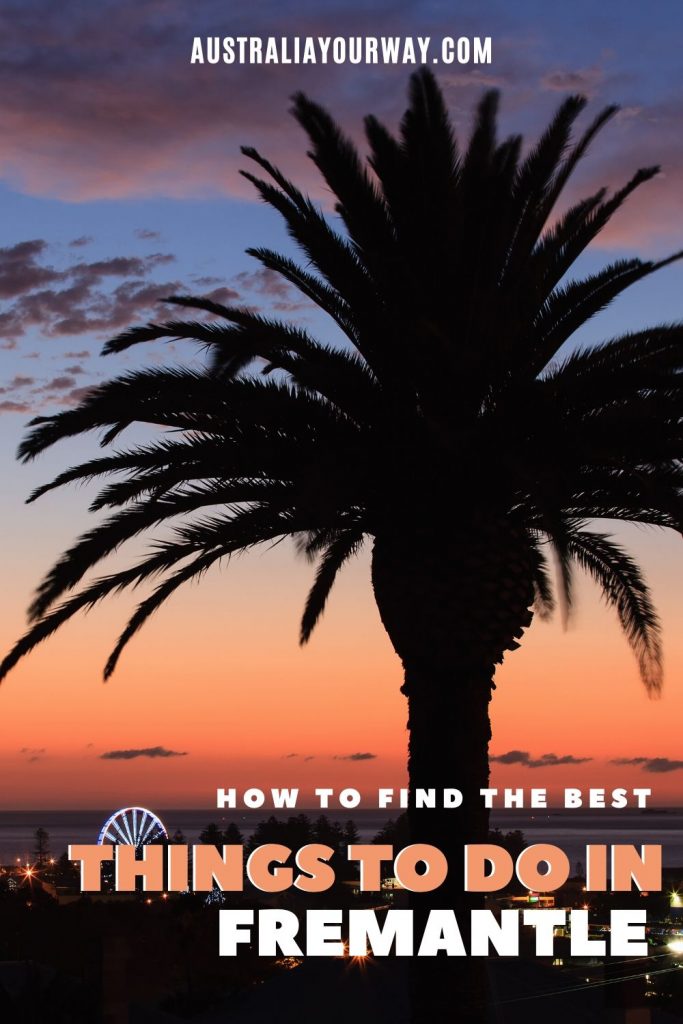 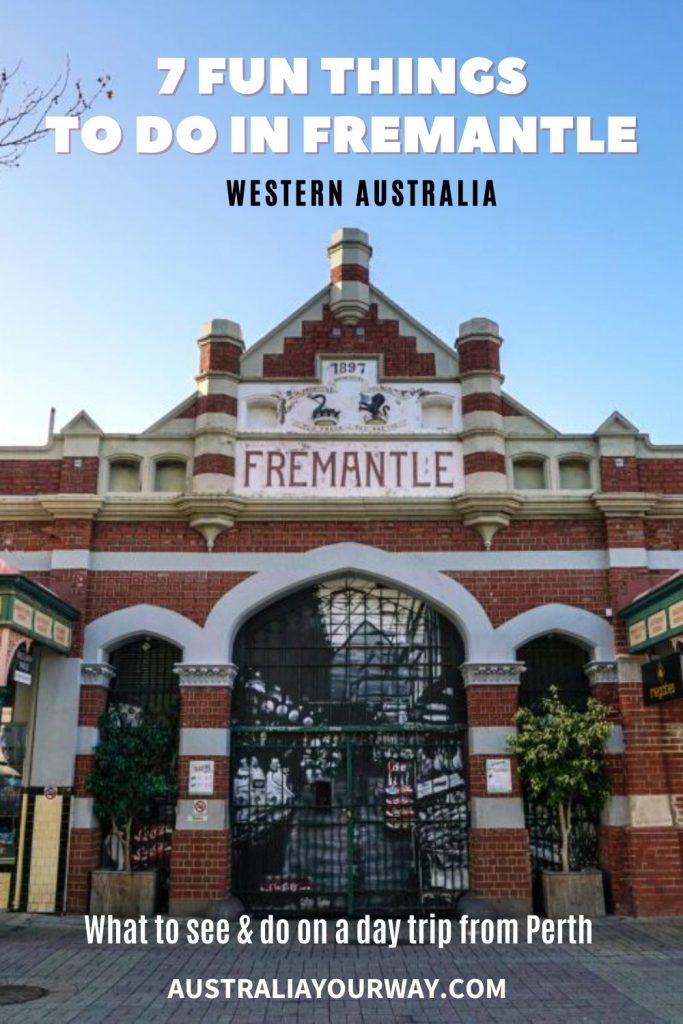 We highly recommend you make your way just 30 minutes from Perth and discover the seven best things to do in Fremantle for a fantastic day out. This destination offers something for everyone with plenty of free things to see and do as well.

THE 10 ABSOLUTE BEST THINGS TO DO IN FREMANTLE

There has never been a better time to travel in Australia. So many travellers put this off in favour of going to exotic and far-flung places. But your local area can have as many secret and amazing attractions and places as any foreign location.

The same applies to Fremantle in Perth. Lots of locals ignore the charms of this area, but why not spend some time here when you’re looking for the best things to do in Fremantle, you’ll find maritime history, historic pubs with live music, and cafes galore along the cappuccino strip.

The Fremantle Prison is one of the most important historical sites in Western Australia and one of the grimmer things to do in Fremantle. Built in the 19th century, it remained in use until 1991 and carries a dark history.

Floggings, escapes, riots, and hangings all took place between its walls, originally built by convicts. This often-grisly history is now open to anyone who wants to explore this World Heritage Listed site.

You’ll find a variety of tours at the prison including:

This is a truly fascinating site and a window into the city’s darker history, so make sure you include it in your Fremantle day trip itinerary.

Where: 1 The Terrace, Fremantle
When: Open daily 9am to 5pm (9pm on Wednesdays and Fridays)

Learn more about Fremantle’s Convict and colonial history on a guided tour.

It’s not surprising that in the port city of Fremantle, exploring the historical connection to the ocean is one of the most popular things to do. The Maritime Museum showcases the most iconic vessels from the city’s past–from leisure to sailboats.

But the exhibits aren’t all that pleasant. On the WWII submarine slipway is the HMAS Ovens, a vessel from the Cold War era and a memorial for the submariners who fought in the war.

The collection also includes the WA Shipwreck Museum, home to relics from hundreds of years of maritime exploration. Over the years, it’s become the Southern Hemisphere’s leading maritime archaeology museum and home to artifacts like:

Little Creatures is an iconic pub located at Fremantle Fishing Boat Harbour, and one of the most popular things to do in Fremantle. It has everything going for it–from a backyard area where you enjoy the sunshine to craft beer – and a delicious and not too expensive menu.

Basically, it’s the perfect place to kick back with some friends, have a few drinks, and relax in a vibrant and friendly atmosphere on a lazy afternoon. They even have a kids sandpit if you need some time out! So, even if you’re only spending one day in Fremantle, make sure you put this on your itinerary.

If you are a beer lover, the Little Creatures Brewery Tour is great fun. Over 90 minutes, learn all about the process and ingredients and, best of all, get to taste the full range. It’s great value at only $25, and you can cancel up to 24 hours beforehand should your plans change. Beer loving tourists might like to drop by Fremantle in November for the annual Fremantle BeerFest.

When you’re trying to decide what to do in Fremantle, the market is an obvious choice. This is a market with a long history stretching back to 1897. It’s a favourite among locals and visitors alike and a great spot for shopping for gifts.

Open on Friday, Saturday, Sunday, and Public Holidays from early to late, the market offers:

Dedicated to showcasing the best in independent and indigenous art and products, this market is one of the best things to do in Fremantle if you want to experience the heart of the city. There are usually buskers and other entertainers around to entertain you with a song or show as well.

The Bon Scott statue was erected in memory of the famous AC/DC singer, whose family moved to Perth when he was very young. It’s one of the many monuments that you’ll find around the city of Fremantle.

This statue is one example of why walking the streets looking for hidden pockets of street art is one of the most interesting things to do in Fremantle.

Fremantle has long been a hotspot for art and artists; you can’t walk more than a few metres without seeing something fantastic on an otherwise plain building.

Some of the best places to see Fremantle’s urban art scene are:

The Round House is the oldest public building in Australia and the oldest in WA. It was built to house convicts but later became a police lock-up.  From the top of the building, you have a view over to Rottnest Island.

Volunteer guides provide background on the history. Time your visit for the 1pm cannon firing if you can.

One of the best things to do in Fremantle is also a great introduction to the area. The Fremantle tram tours depart every 15 minutes and take 25 minutes to amble around the streets, past all the best sites. It’s the ideal start to a Fremantle day trip when you don’t want to waste any time working out where everything is.

Starting at the Fremantle Town Hall on the corner of William and Adelaide Street, the tram will take you past:

Along the way, the friendly drivers offer commentary on all of the sites and the best places to eat, drink, and hang out in the city.

From its early life as the Fremantle Lunatic Asylum, this has always been an interesting spot. This Australian Gothic building is striking, it was built by convicts in the 1860s. In the 1970s it was converted to an arts centre.

Today the Arts Centre offers a mix of exhibitions, performances and courses. There is a lovely cafe on site if you are in need of a coffee.

Once known, rather sadly, as Whaler’s Beach, this area is adjacent to the fishing harbour and has become the art centre of Fremantle. It has the same relaxed atmosphere as other parts of the city and is one of the best things to do in Fremantle if you have a few hours and want to wander until you find something amazing.

Here’s what to do at Bathers Beach:

Basically, if you’re trying to decide what to do in Fremantle, this is an excellent area to start in.

The perfect spot for a break on a sunny day, Esplanade Park offers plenty of shade on hot summer days but can get a little cold in winter. There is a great adventure playground, skatepark and giant tourist wheel making this a popular spot for families to visit.

You will find the park opposite Bather’s Beach and Little Creatures Brewery.

How to get to Fremantle

The most pleasant way is on the water – take a cruise from Perth – it takes about 75 minutes and includes commentary. There is no public ferry. Alternatively, there is a train service from Perth to Fremantle that will cost you less than $10 and takes about 30 minutes.

You can find all the public transport options here.

No matter what you enjoy doing, you’ll find lots of things to do in Fremantle for a long or short break. Taking a Fremantle day trip or spending an afternoon doing something new can be nearly as rewarding as a holiday overseas, without all the trouble of big trips. 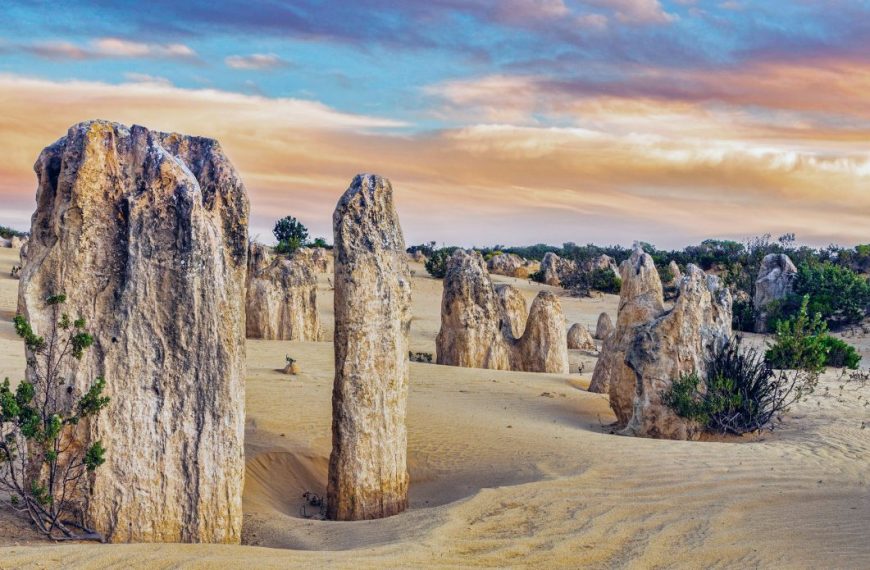 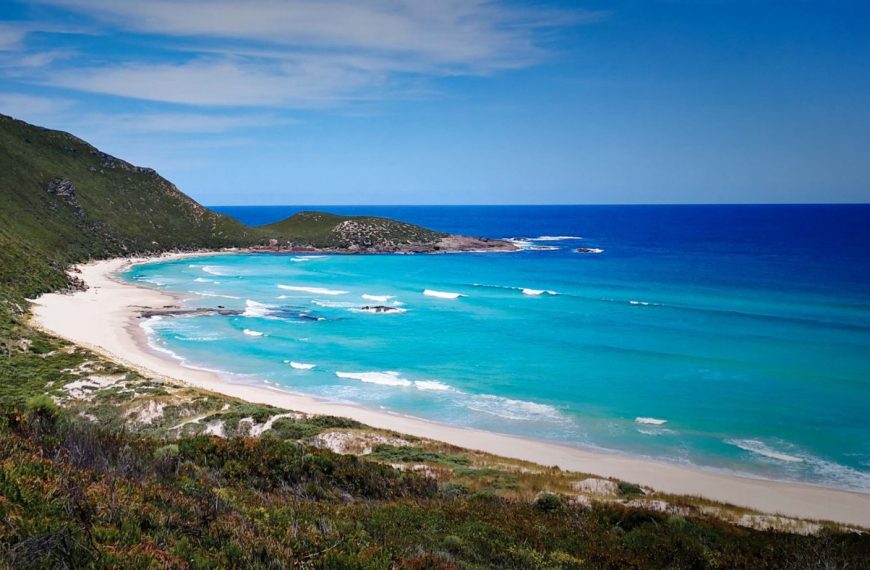 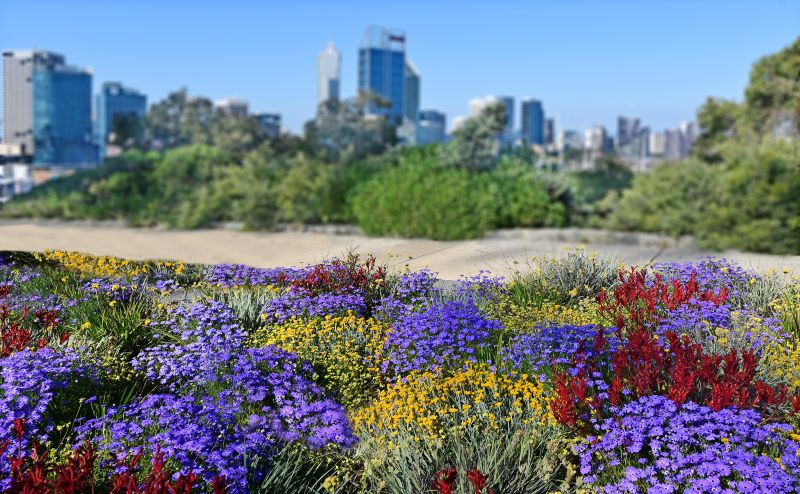