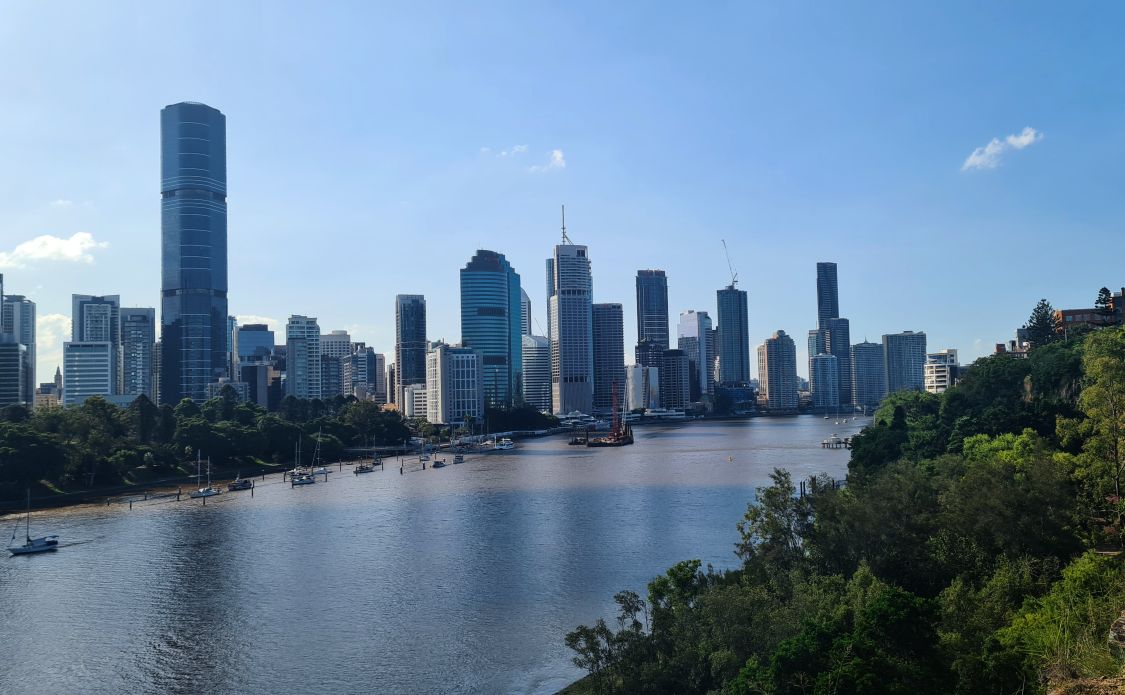 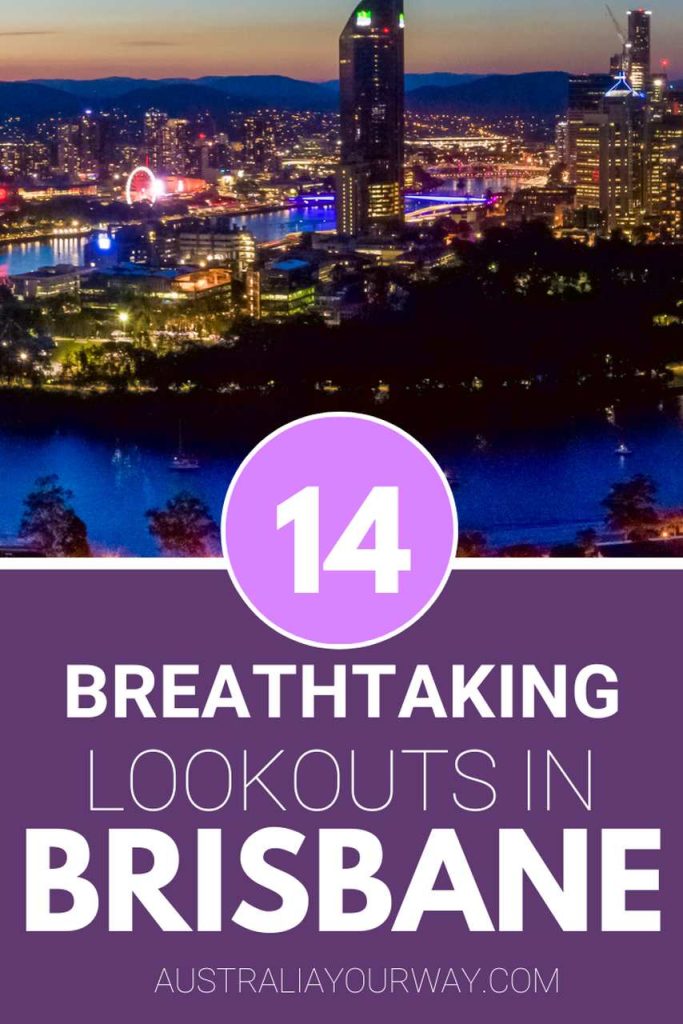 Elevate your Brisbane travel itinerary or weekend plans with these 14 best Brisbane lookouts using our easy to follow guide.

The Brisbane skyline is increasingly more impressive as it builds towards being a new “world city” by 2031. In addition to the gleaming skyscrapers are distinctive bridges and green local parks dotted around the Brisbane River. This combination creates photogenic city views well-worth adding to your weekend or trip itinerary.

Not only have we handpicked the best Brisbane lookouts but also sorted them based on whether you need a car. If you’re staying around the Brisbane CBD, we recommend stretching your legs or hiring an electronic scooter to see the first eight Brisbane lookouts on this list. Then we’ve got six more lookouts in the Brisbane suburbs reachable with a car or public transportation.

To top it off, all the Brisbane lookouts on this list, except for the Wheel of Brisbane, are completely free. So, get your sweetest smile and camera phone ready for these 14 best lookouts in Brisbane.

Want to have a fun weekend in Brisbane without blowing the budget? Read our best things to do in Brisbane on the cheap.

The traditional name of Brisbane is Meeanjin, the place of the blue water lilies. It was founded upon the homelands of the Turrbal and Jagera peoples

8 best lookouts in Brisbane CBD to visit on foot, bike, or scooter

There’s no better introduction to Queensland’s capital than a free tour of the 92-metre-high Brisbane City Hall Clock Tower. Even as a Brissie-born local, I was fascinated to hear the history of Australia’s largest analogue clock faces.

Groups of four are led by a guide onto an old-fashioned cage lift transporting you to the top for a 360-degree lookout. After descending from the viewing platform, you can follow your curiosity into the colourful hallways of the Museum of Brisbane (MoB).

Local tip: MoB can be tricky to find as not all elevators and stairs access level three. We took the wrong elevator and were too late for the tour on our first visit. Luckily, they rebooked us a few days later. Plan to arrive fifteen minutes early, in case you get lost.

Where: Brisbane City Hall Clock Tower, Brisbane City
When: The clock tower tours run daily, every fifteen minutes between 10:15 am and 4:45 pm. Opening hours for the MoB are from 10:00 am to 5:00 pm seven days per week.

Designed by the same developer of Ferris wheels in Paris, Kuala Lumpur, and Niagara Falls is our very own Wheel of Brisbane.

The 60-metre tall, permanent structure provides a 360-degree lookout over Brisbane during a 15-minute trip. There are 42 individual gondolas that can hold groups of up to six adults and two children up to 11 years old.

Local tip: Time your ride for sunset and see the city lights around South Bank and the river.

Another spectacular lookout to see the Brisbane’s Gallery of Modern Art (GOMA) and bridges lit up is the Bicentennial Bikeway. The off-road bikeway stretches 4.8 kilometres from Toowong to the Brisbane CBD and provides phenomenal viewpoints.

I highly recommend hiring an electronic scooter or bicycle for a thrilling adventure. Or if that’s not your style, it’s a great walking track.

Where: QUT Gardens Point, Gardens Point Rd, Brisbane City
How to get there: You can make a 4-kilometre circuit from Southbank across the Goodwill Bridge turning left onto the Bicentennial Bikeway and then crossing back on the Queen Victoria Bridge. Otherwise, extend it by returning on the Kurilpa, William Jolly, or Go Between Bridge.

Instead of turning left onto the Bicentennial Bikeway after crossing the Goodwill Bridge, you can also turn right onto the Bunya Walk. This scenic path will take you through the Brisbane City Botanic Gardens and connect to the City Reach Boardwalk.

On this 1.4-kilometre stroll, you’ll be spoiled for Instagram-worthy shots of the adjacent Kangaroo Point Cliffs and Brisbane River. My favourite lookout is where the boardwalk meets Howard Smith Wharves.

Where: 82C Boundary St, Brisbane City
How to get there: Start from the ends of City Botanic Gardens and Howard Smith Wharves, or enter from Eagle Street Pier where there is a ferry terminal. You can walk, cycle, or hire an electronic scooter.

This trendy lifestyle precinct is a relatively recent addition to Brisbane. Heritage-listed Howard Smith Wharves was originally constructed in the 1930s but then abandoned after thirty years. Seeing it in all its glory now, it’s hard to imagine such an ideal location was overlooked for so long.

The developers have done a fantastic job of creating outdoor and community-focused spaces with lively breweries, wine bars, and restaurants.

There are many vantage points here with the awe-inspiring backdrop of the Story Bridge. I like the lookout from above on Bowen Terrace, but you can also walk along the New Farm Riverwalk for scenic views from Wilson’s Outlook in New Farm.

Where: 5 Boundary St, Brisbane City
How to get there: If you’re staying in the Brisbane CBD, you can walk or ride a scooter along the City Reach Boardwalk until you reach Howard Smith Wharves. Alternatively, hop aboard one of Brisbane’s charming CityCat ferries. Plan your public transportation on Translink.

Did you know you can walk across Brisbane’s most iconic bridge? Like Brooklyn Bridge in New York City, the Story Bridge is a must-do in Brissy. Continue on from Howard Smith Wharves, take an elevator up to Bowen Terrace, and walk right onto the 777-metre-long steel bridge.

On the other side, you’ll be rewarded with yet another lookout in Captain Burke Park. Pack a picnic or treat yourself to a sneaky craft beer at Sea Legs Brewing.

Where: 117 Holman St, Kangaroo Point
How to get there: Walk, cycle, or catch a CityCat to Holman Street Ferry Terminal.

From Captain Burke Park, you have the choice of walking west down to Kangaroo Point Cliffs and South Bank. Or choose the lesser-known lookout by turning east and walking to Dockside. Watch the boats and jet skis pass by as you stretch your legs.

This is a handy lookout if you are staying in Kangaroo Point or East Brisbane.

Where: Dockside Lookout on Holman St, Kangaroo Point
How to get there: Walk, cycle, or jump on a bus from the city. Plan your public transportation on Translink.

So far, all the spots we’ve shared have Brisbane City views, but this lookout has a different landscape. Orleigh Park is a relaxing riverside area to enjoy sunset views whether you’re with your family, partner, or travelling solo.

During the day, this is a popular spot for groups and parents with kids. There’s a playground, dog park, and picnic area.

Where: 68 Hill End Terrace, West End
How to get there: Walk, cycle, or catch a bus from South Bank. You can also arrive by CityCat to the West End Ferry Terminal.

Highgate Hill Park is a three-minute drive from Orleigh Park and ten minutes from Brisbane CBD. Despite living in Brisbane for the majority of my life, I only recently visited this local lookout and was surprised by the stunning views.

Many people bring picnic blankets, snacks, and drinks to enjoy the sunset over the city.

Mt Coot-Tha is easily one of the most well-known and frequented viewpoints by visitors to Brisbane. Although it’s more of a tourist attraction than a local lookout, there are fantastic views and plenty of attractions.

While you’re at Mt Coot-Tha, you can visit the Brisbane Botanic Gardens, Sir Thomas Brisbane Planetarium, and many trails throughout 1500 hectares of open eucalypt forest.

On the other side of Mount Coot-Tha is the much quieter Green Hill Reservoir Park and Sit Thomas Gaffney Lookout.

This is an off-leash dog area with a short trail around an elongated building decorated with street art. The Sir Thomas Gaffney Lookout is framed by beautiful bushland.

Where: 203 Russell Terrace, Chapel Hill
How to get there: Mount Coot-Tha hiking trails connect to Sir Thomas Gaffney Lookout, taking approximately 35 minutes. We drove from Brisbane city and it took around 15 minutes.

On Brisbane’s northside, just a ten-minute drive from the CBD is Bartley’s Hill Lookout in the sophisticated suburb of Ascot.

The city views are much closer than the other suburban viewpoint, apart from Highgate Hill Park and are a nice option if you’re staying near here.

Explore more of the Brisbane region with Whites Hill Reserve Track, southeast of the CBD. There are 13 interconnecting hiking trails with an easy walk of 565 metres to the lookout on Whites Hill Summit.

Keep an eye out for koalas while you are walking through the Australian bush. Then enjoy The Common with picnic tables and a children’s playground.

Where: Boundary Rd, Camp Hill
How to get there: There is a car park for this lookout or you can choose from multiple buses (203, P205) that stop nearby. It takes about an hour by bus or twenty minutes by car, as long as you don’t drive during peak hours.

While you’re on the southside visiting Whites Hill Reserve Track, there’s another lookout with Brisbane views in the suburb of Seven Hills. We stopped at Paramount Lookout to snap a quick pic after hiking nearby.

Where: Paramount Lookout, Paramount Terrace, Seven Hills QLD
How to get there: A fifteen-minute drive from the city and less than ten minutes from Whites Hill Reserve.

We hope you enjoy these Brisbane lookouts. Please come and share your own shots in our FB group and let us see what you discovered.

About the Author: Chantell Collins is a Pinterest Advertising Consultant, eco enthusiast, and occasional Travel Writer. Her work has been featured in Skyscanner, Yahoo, MSN, and many more. After living abroad for almost ten years, she’s renewing her affection for Australia through slow travel.